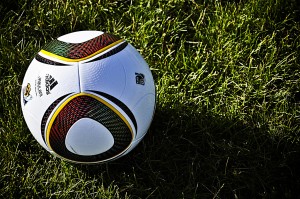 We’re deep into the World Cup now and there have been many shocks, surprises and delights along the way. If you’ve grown a little tired of seeing football on your television, perhaps you might quite like seeing The Alternative World Cup at Galeri Caernarfon instead.

After England crashed unceremoniously out of the World Cup, interest in the tournament might have dipped a little but thanks to this amazing showing of dance theatre, excitement for all things soccer might start peaking throughout our area again come the 4th of July.

By mixing street dance and freestyle football skills, this performance looks like being one of the most intriguing in Galeri’s hectic calendar. Following the story of a young man returning abroad from Southampton who takes a football with him back to Brazil in 1894, it’s bound to interest those who are interested in the history of the illustrious sport.

After sending the locals into a football frenzy, elitist country clubs start to pop up all over Sao Paolo that only allow certain people to participate. Frustrated at being left on the sidelines, the locals rise up and join the Portugese in an effort to beat the British at their own game. All of this might sound exciting enough as it is but when you combine drama with choreography and dazzling freestyle, you are onto a definite winner.

The show is put together by Temujin Gil, lead choreographer at the unforgettable opening ceremony of London 2012 for the NHS and storybook sequences. If this kind of pedigree doesn’t attract you enough to come and see a multicultural bonanza of all things football, we don’t know what will.

With two performances on the 4th of July at 2pm and 7.30 pm respectively and with a ticket costing as little as £6, there’s no excuse to not get excited about The Alternative World Cup. Why not book with the Black Boy Inn Bed & Breakfast Caernarfon and stay the night too? There’s plenty going on in the town itself so book soon to avoid disappointment.